A city thats been bombed and rebuilt and then rebuilt again, Munich still holds both old charms and new. The purpose of our visit was to enjoy the first weekend of Frühlingsfest aka ‘Springfest’, the little sister of Oktoberfest. Springfest colors Munich in pastels for the weekend following Easter. While still considerably smaller than its autumnal sister, Springfest is the largest springtime festival in Europe. Visitors travel from all across the continent to dress up and drink up. 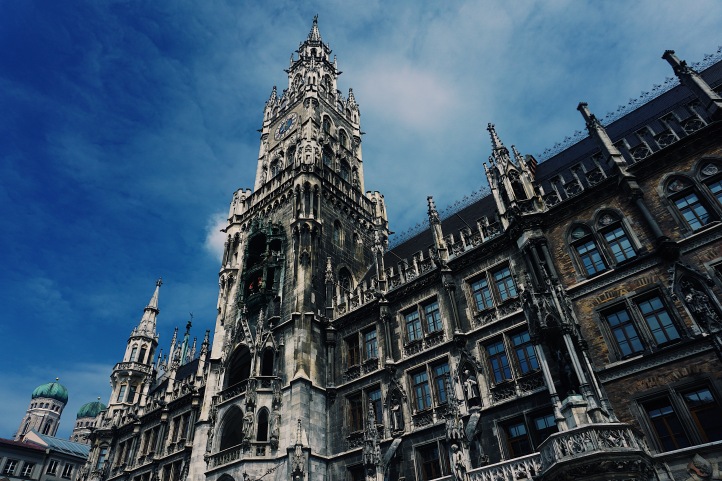 Before I even talk about Munich, I want to talk about how we got there. When german train line DB picked us up in Bologna, my roommate and I had one reaction simultaneously, “This looks like the Hogwarts Express”. While lacking the antique exterior, the interior was set up in individual rooms containing six seats each. The seats faced each other, and could be fully reclined to make a bed between them. We boarded and stole a room to ourselves, drew the privacy curtains and got some sleep to prepare of the weekend. Sometimes 8 hour train rides aren’t so bad.

After arriving, we checked into our hostel (which was mere steps from the train station) and prepared to explore the city. Downtown Munich was bustling with the life of a Friday morning, full of farmers markets and chatty tourists. We stopped by a shop that sold dirndls, a traditional german outfit that nearly everyone wore to attend the festival. Now, I’m someone who regularly attends the Renaissance Festival, so getting dressed up for events like this is something I fully embrace. Unfortunately I went in with the mentality of not buying one, as I’m quite short on funds at this point in the semester. I came out with a dirndl nonetheless, convincing myself I could reuse it as a ‘Belle’ Halloween costume in my future.

The lady working the floor of the shop was fueled with such a fire to serve her customers it was almost overwhelming. When I went in with my roommate (who fully intended to purchase a dirndl) and said I wasn’t looking, this woman said “No no, I’ve already sized you with my eyes, come try these one”. She lead me to a rack and then proceeded to shove me into a dressing room. Soon I was being laced up and tucked in to an elaborate german ensemble. As soon as I saw my reflection in the mirror, I knew I was a goner, the thing was too darn precious to pass up.

The majority of the weekend was spent on the festival grounds. It appeared as just an average fair, with carnival games and rides all around. The major difference was beer. Beer completely encompassed you; beer merchandise, beer themed activities, and even beer flavored gummie bears. Outdoor beer gardens and stands seems to be crammed between every other shop, all vying for your attention at once. 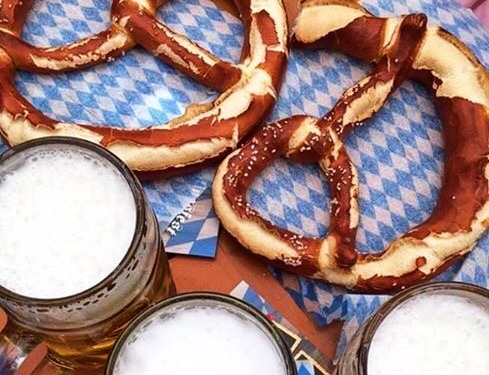 The true spotlight was on the beer halls. Two monstrous halls filled to the brim with over 2000 people in each. The vast majority of the hall was filled with college aged students, all dawning dirndls and lederhosen, while families sat in the reserved wings and laughed. A band at the front of the hall blasted Bavarian music to keep spirits high while also doing covers of well known American classics to please to crowd. The workers run beer to your table with 4 steins in each hand, slamming them down passionately in front of you. Beer sloshes, people dance on the tables, and pretzels are larger than your head. Truth be told, the Germans know how to have a great time. There was often a chant lead by the band to encourage singing and drinking by the crowd. I couldn’t understand the words, but attempted to sing along anyway, which I think we pretty much the theme of the whole trip in itself.